Estuarian Benefits
The BTES produces a half-billion pounds of fish and oysters annually, and supplies 10-15% of our nation’s oil production. Its expansive marshes provide habitat for previously endangered species such as the brown pelican and the bald eagle, as well as other waterfowl and migratory birds. Recreational opportunities for residents and visitors from around the world abound. The health of the estuary and the quality of its bayous and bays, fish and wildlife are critical to our regional economy and the sustenance of our nationally-unique culture. 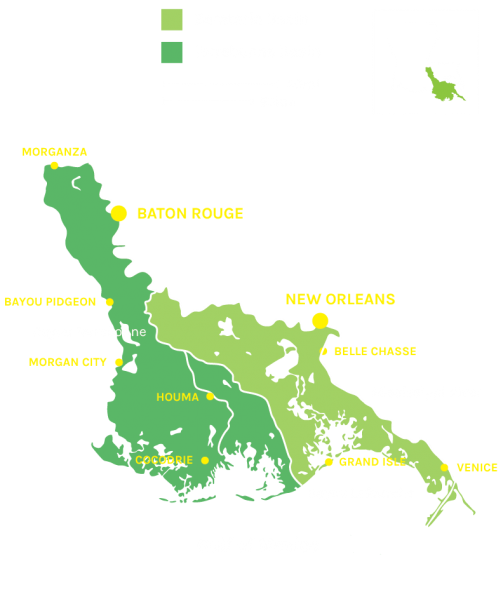 Why is the BTES losing land?
The most important factor contributing to land loss in the BTES is subsidence, a complex process in which marsh sediments compact and sink under their own weight. Historically, annual floods over the banks of the Mississippi River provided freshwater and sediment inputs to BTES marshes and kept them above water. Levees were constructed to protect communities across the nation from these floods, but they also prevent water and sediment from reaching the BTES marshes.

Subsidence drowns coastal marshes, causing chemical changes in wetland soils which eventually kill marsh vegetation. Without plant roots to hold it together, marsh soil breaks up and is carried away by wave action. The end result is that marsh is converted to open water. This additional volume of water causes an increase in the tidal prism, forcing passes to enlarge and reducing the lengths of barrier islands, which protects interior marshes from wave action and hurricanes. Barrier islands are also subsiding, and due to both these stressors, ultimately disappear without new sediment inputs.

Other human-caused and natural factors can influence land loss rates in the BTES. For example, canals and raised roadbeds, breached natural ridges, and other hydrologic modifications can interrupt tidal exchange and allow salt water intrusion.

What can we do to help?

Restoring and protecting the BTES is a long-term and complex endeavor, and your assistance is vital. BTNEP receives some federal funds through Section 320 of the EPS’s Clean Water Act, but so much more is needed in order to successfully implement the comprehensive plan for restoring and protecting our national estuary.